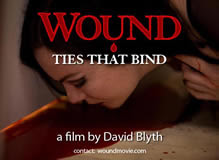 WOUND is the new feature film, written and directed by David Blyth, New Zealand’s controversial cult / horror film maker. www.davidblyth.com
Filming was completed on 31st January 2010 and is currently has been submitted in various film festivals..

WOUND is a Supernatural Horror Film that explores the dark worlds of mental illness, incest, revenge and death. We follow Tanya as she searches for the mother she has never met – a mother (Susan) who gave her up for dead after being abused by her own father who remains stuck in her present life.
Tanya returns from the dead to confront and possess Susan with all her deepest fears and desires, sending Susan into a state of madness and gore filled retribution. 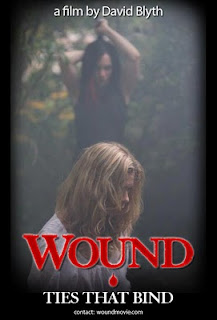 WOUND explores and confronts the dark, distorted supernatural world that lurks
within  us all.

A young woman, alone, attempts to fight the demons that begin to haunt her days and nights – in a series
of  brutal confrontations with the enemies of the past who want to possess and kill her…
But they are all members of her own family…of her own self.

A dark, disturbing look into a haunted woman’s mind…..

This is one terrible dream you will never wake up from…. 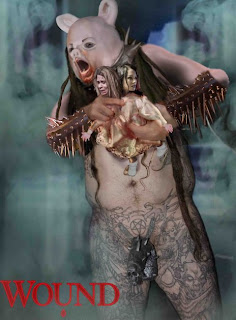 The way Susan Purdue sees it, the patricide she’s been planning for so long isn’t just an act of revenge, it’s a necessity. When her father returns to the family home, all is long since prepared and the killing can finally occur. The rotten soul will pay for his unpardonable, incestuous transgressions against his daughter when she was just a child. But once her dad is good and buried in the backyard, Susan doesn’t find the closure she anticipated. Tormented by a host of demons and trapped in a dead-end job, she slides quietly into a deep madness that blurs the distinction between her banal reality and her nightmarish, sadomasochistic fantasies. To survive, she submits herself to a strict dominator for whom the worst tortures are the same as the most gentle caresses.

Tanya has a boyfriend, skips school and gets her kicks hanging out in sleazy dives. She’d be a pretty unremarkable teen if not for the identity crisis that has gnawed inside her for so long. Adopted at birth, she ties her troubles in life to the fact that she has no idea who her true parents are. One afternoon, her therapist gives her what she has always wanted—confidential documents from the orphanage at which she was so cruelly abandoned. While the dossier doesn’t identify her father, her mother’s name is marked down as Susan Purdue. The destinies of these two women will cross, leading them both into a parallel world of unearthly creatures of flesh and latex, a place where the most shocking perversions are realized. At the heart of this purgatory of the senses, the masks will fall and the unbearable truth will surface in a sea of blood. Tanya and Susan, each other’s mirror image, will have to face themselves. Abandon hope, all who enter here.

With the stunning documentaries TRANSFIGURED NIGHTS and BOUND FOR PLEASURE, presented at Fantasia in 2008, the fetishistic fascinations of New Zealand filmmaker David Blyth (creator of the cult hitsDEATH WARMED UP, RED BLOODED AMERICAN GIRL) were revealed. His highly anticipated return to fiction explores his themes anew, transposed to the screen like a lucid fever dream. One proceeds with caution into his dark universe, where only the logic of fantasy is the guide. Blyth surprises by expertly echoing the atmospherics of Lynch while recalling ANGEL MINE, his debut feature film. Blyth punctuates this journey with violent images as bizarre as they are disturbing, from a painful castration to an unusually grotesque birth. Bewitching and phantasmagorical, dangerous and amazing, WOUND will leave its mark on you.
Posted by Dimi Nakov at Wednesday, June 16, 2010